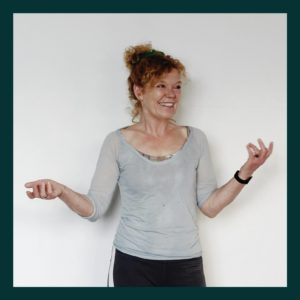 Fascial Flow® was developed by Jeanne Jensen (b.1954). Based on 30 years of pioneer work, Jeanne developed this unique combination of Continuum Movement®, Rolf Movement® and Body Mind Centering.

“Throughout my life, I have been fascinated by the body and its magic. When I encountered Rolfing® 27 years ago, a new door opened for me. I could see how people got rid of old wounds and could rest more in themselves. They did not just get a better posture but stood more clearly in the world as people. When I later trained as a Continuum teacher in the United States, I learned the deeper meaning of working with the connective tissue and fluids in the body. Here I experienced how the senses in the body could strengthen the inner balance and experiences. That’s why I developed Fascial Flow® to give you the best of both worlds!

Fascial Flow® allows you to release old trauma, build agility and flexibility. But not only that, you also get a healthy posture and the ability to win back the original vitality. “

“My own very first Rolfing® treatment was one of the most amazing things I had ever tried. For the first time in my life, I felt I could breathe. It was amazing how much space I got inside. Not only was I posturely straightened out, my relationship with myself and the outside world also began to change. It was a deep realisation for me to experience how much my body was able to correct itself, and to what extent my mental well-being depended on my physical balance. The way I felt connected to myself through the change of my physical state was truly a revelation to me. I found myself through the rediscovery of my body. It showed me how important it is to listen to ones inner voice in order to maintain integrity, and it gave me the courage to follow my intuition. “

TRAINING AS AN ADVANCED ROLFER®

“Therefore, it wasn’t long before I packed my life up and moved a year to the US to take the education as Rolfer® myself. It was a challenge in more than one sense. I was dyslexic and could only speak very little English, but this was just something I had to do. For me it was the beginning of a journey. Not just a personal journey where I gradually witnessed what my body had to tell, but also in a literal sense – a journey! With a constant urge to educate myself, I have traveled large parts of the world to learn from the very best. Among other things, I had the great luck meeting Peter Levine, “Rolfer and founder of Somatic Experiencing”, just after I graduated as a Rolfer®. It was again a great ‘aha’ experience to discover how much the nervous system affects the connective tissue. “

TRAINING AS A CONTINUUM TEACHER

“My meeting with Continuum happened through the Rolfing Community. I had signed up for a 3-day workshop with Susan Harper. I was in total defence: what was this! Should I lie there and twist around and make sounds – it was the most overstepping boundaries experience I had been with for a long time. But when I got home, I felt so good and my body knew again that this was what I was supposed to do. Over the next few years, I attended several workshops with Kim Brody and Susan Harper in Europe and became increasingly fascinated by continuum and the effect it had on my life. Here it was about contacting a much deeper layer than the connective tissue, namely the body’s liquid system.

It all came together, and I knew I had to go to the United States and meet Emilie Conrad. At the same time, I was afraid, because I knew it would change my life – and was I ready for this – yet again? So with a mix of excitement, expectation and anxiety, I left in 2003. Emilie was scary but also fascinating. When she demonstrated a Continuum sequence, I had the impression that everything in the universe was connected, a bodily being so total, as in a bodily meditation. What she said, and the conviction she had, I totally agree with: How can we continue to be in our biosphere and be plastic without breaking in/being broken by the culture we live in?

This was nothing short of miraculous and put everything I had learned in the past in perspective. It has only strengthened my conviction of the body’s marvellous ability to heal itself. “

JEANNE ABOUT THE DEVELOPMENT OF FASCIAL FLOW®

“Subsequently, I travelled to the United States 3-4 times a year to study with Emilie Conrad (until her death in 2014). Furthermore, I studied the Rolf Movement for a number of years with Hubert Godard. In the beginning, I separated Continuum and Rolf Movement, but gradually found a form that I  named Fascial Flow®. Both Emilie and Hurbert have been a great inspiration for the development of Fascial Flow®. Bonnie Bainbridge Cohen (many more) have also been of great influence.

I am still curious and love to explore our potential as human beings, and how we can contribute to a better world. If you can be in yourself and sense yourself from the inside, it is easier to feel and relate to other people, meet your fellow man with abundance, without fear. I believe this is the right way to contribute to the way we are in the world, together. “